4 reasons why you should NEVER borrow money for a car

Originally published at: 4 reasons why you should NEVER borrow money for a car – Personal Finance Club 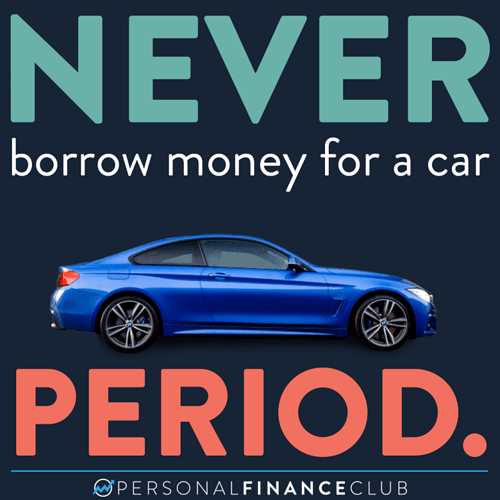 Borrowing money to buy a car is an amazingly effective four pronged strategy for burning all your money. Here’s how it works:⁣‎
⁣‎
1. Spend money you don’t have⁣‎
2. PAY MORE money just to borrow that money you don’t have⁣‎
3. Buy more car than you otherwise would⁣‎
4. The thing you buy plummets in value⁣‎
⁣‎
Those four forces, combine like Voltron into one massive wealth-crushing force.⁣‎
⁣‎
Ok, but you WANT a car and you don’t have any MONEY? What do you do? The average US new car payment is $554/month. Let’s say you’re broke and can only afford a $300/month payment. Here’s what you do:⁣‎
⁣‎
• First four months: Don’t have a car. Bus, bike, borrow, barter, and beg your way to where you need to go. I know it sucks. But it’s only four months of your entire life and it means you get to be a millionaire later. Humans were around for 6 million years without cars. You can do four months. Put your $300/month in a savings account.⁣‎
• Month five: Take the $1,200/month and find a deal on a clunker that runs. Boom. You have a car, and zero debt. Keep saving $300/month.⁣‎
• Year one: Sell your $1,200 clunker for $1,200. Combine it with the $2,400 now in your savings account and buy a perfectly decent $3,600 car. (I drove a $3,000 car for six years). Keep saving your $300/month.⁣‎
• Year three: Sell your $3,600 car for $3,000. Take your $10,200 and buy a really darn nice used car. You can get a 2-3 year old car that looks like new. Drive it for five years. Keep saving your $300⁣‎
• Every five years later: Take the $18,000 you have saved, plus the $7K or so from your last car and buy yourself a $25,000 car you want. ⁣‎
⁣‎
When you repeat that last step, you’ll end up with EXTRA money and you’ll be forced to invest the rest and become a millionaire. See, now wasn’t riding the bus for four months all those years ago worth it? You can tell your kids about all the character you built and how many nice people you met.⁣‎
⁣‎
As always, reminding you to build wealth by following the two PFC rules: 1.) Live below your means and 2.) Invest early and often.⁣‎
⁣‎
– Jeremy⁣‎
⁣‎
via Instagram

Does this advice still hold with a 0% loan?
So long as I am following #1 and 3 (spending money I dont have, or buying too much car), aren’t I better off taking as much of a 0% loan as I can and paying it off over the longest period. Keeping the cash in an index fund making more money than the loan interest.
Things may have changed, but my last car loan was 0%, and I am probably going to buy a new car in the next 6-12 months.