Bitcoin is legal tender in El Salvador - should I buy more? 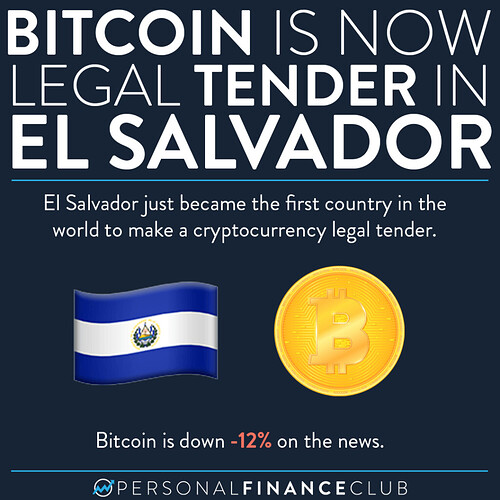 El Salvador’s president Bukele says bitcoin will help El Salvador move towards the future and help those who don’t have access to traditional financial services.

When I hear about bitcoin or cryptocurrency, it’s rarely about the utility of the technology. I never hear “I didn’t have any way to transfer money to another person and now I do!” instead I hear things like “It’s the future so it’s gonna go up in value 100X!”. But if it is “the future” does that mean it’s going up 100X? Does the fact that El Salvador has adopted it as one of its legal tenders mean the value per coin is going to skyrocket? Did you invest in El Salvadoran currency before this? Do you want to now?

I certainly don’t know the future, but the fact that bitcoin price dropped on this news seems to imply bitcoin speculators don’t think getting adopted as a currency means big growth ahead.

I personally have trouble finding a fundamental reason that bitcoin will keep increasing greater than inflation for years to come. It doesn’t represent any profits or growth of underlying assets, rather is a currency or store of value. I have been putting $100/month into crypto for the past few months, mainly to address my own FOMO. I don’t have any plans to change that. At the moment crypto represents about 0.05% of my portfolio. I’d caution those who want to go higher than 5% or so.