I completed the course and it was great! I left a review also

I have a few follow-up questions. Currently 26 years old and this stuff gets me excited! I currently contribute to a PreTax457 with no match. I am a local government employee and I am eligible to retire in 20 years with a pension. The perk of the 457Pretax is that I have access to all the money without penalty upon retirement. Is pretax better in this situation and does a pension affect anything with rollovers etc? 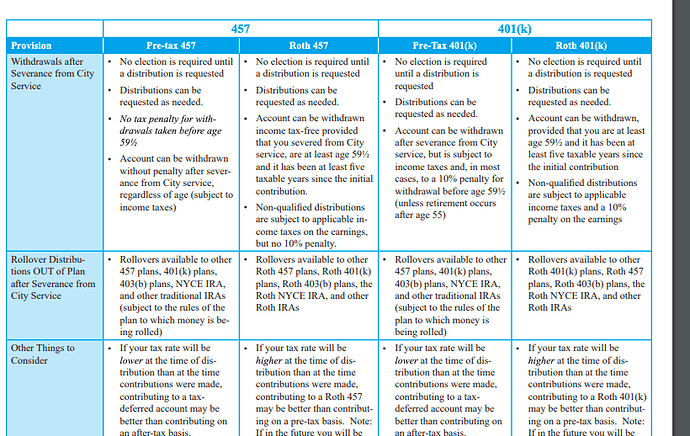 The city I work for and my insurance plan don’t have an HSA but an HCFSA? I am not sure of the difference but from brief research, I think it is different and a use it or lose it type deal.

Not sure about the other questions, but regarding pension - I assume you meant a qualified defined benefit retirement plan - if so, check with the plan admin if the plan allows a lump sum payment option or does it offer only annuity options. If the plan allows only annuity, you can’t rollover it over to an IRA. If the plan allows a lump sum payment (cash out all your pension benefits at once), then you can rollover the pension piece to an IRA. Check if the lump sum payment would be taxable benefit only or would it have both taxable and non-taxable benefits. The non-taxable can be roll-over into a Roth IRA for better tax advantages. The pension (if my assumption mentioned is correct) should be a separate plan from 457 (a non-qualified plan), so one plan’s rollover rule should not affect the other plan’s rule.

Yes, sorry for the confusion. The 457 is an investment account similar to the 401k. My pension plan is a monthly payment distributed after retirement. Is a pension considered income and will this hinder the Roth Conversion Ladder strategy? Should I keep my 457 PreTax and accessible upon retirement? I would think the PreTax would be more beneficial than the Roth?

Would this be a better topic for office hours?

Pension is considered income. Some pension plan allow you to cash out all of your monthly payments as a one-time lump sum payment after termination. May be worth fact checking if your pension allow that option. It may impact your Roth Ladder Conversion strategy-- depending on what your current strategy is.

Can you help me understand why you think pretax 457 would be more beneficial than Roth? I think bottom line is if you understand your financial situation and can explain why you’re making each financial decision - then you’re making the right decision for yourself. Also, I would assume that 457 would allow you to switch between pretax and Roth at your convenience, so doesn’t that mean you can split them and do both to diversify your investment vehicles?

Hey Mindi, thanks for your reply! I will have to check with HR about the pension lump sum, I know that they will pay me a monthly check until I pass then rolls over to my wife until she passes.

The reasoning I am leaving to pretax457 is upon retirement (even if pension is considered income) I will be at a lower tax bracket. I contribute to a ROTH IRA. I get the tax break at this current time, and I will have full access to my money at 47 when I retire. My department does allow me to split between pre tax and Roth. What do you consider the wisest option?

I think you’re making the right decision then since you’re maxing out Roth IRA and your retirement plan allows you to withdraw with no penalty at any age. Another option is contributing all pretax now until you achieve the balance to live from age 47 until 59.5, then switch to Roth if you don’t want to worry about taxes in retirement. But doing all as pretax or split between pretax and Roth won’t change the outcome significantly in my opinion. Both types of contributions are equally beneficial for different reasons. Personally, I think 20 years from now, the tax rates will be higher for all income brackets - but that’s just me speculating the worst.

Also, some states don’t collect state taxes while some have high tax rates, so where to live in retirement should also be considered.

BTW, HSA can be rolled over from year to year, money is always yours. I have HSA. Never had HCFSA so can’t say for certain how it works. But pretty sure you’re right that if you don’t use HCFSA money during the calendar year, you lose it.

If you have access to a 401k and a 457, don’t forget you can contribute $19,500.00 to both when you are financially able. We first maxed the 457 because of the penalty free withdraw benefits. This can help lower your taxable income now if you are getting into those 22% & 24% brackets.

Wow! That is impressive! I am almost at my top pay scale and that is a long-term goal!

Great idea. I work with the City also, I’m currently in the 457k and I just started a Roth IRA. I wish the city matches in 401/457 but they give us pension so it kinda(eh) balances out, well at least that’s what they told me.

@wannaliftpat Pension (defined benefit plan) is most often richer in benefit structure than 401/457 (defined contribution plan). So I wouldn’t complain about having a pension instead of 401/457 match.

With 401/457, you see the company money deposited into your account every month while with pension you will only see the company money in your hand at retirement, so that may give the false illusion that 401/457 is a better plan because you see that money now. I dont know much about government’s pensions, but I would suspect that your city pension allows you to contribute into the plan – if what I suspect is true, I would highly recommend that you to contribute the amount that the pension plan asks for (if you’re not doing so already) because contributing will give you a much higher benefit in retirement than not contributing. Pension often uses 2 different plan-defined formulas to calculate the non-contributory benefit versus contributory benefit. And if you know the formulas of your pension, that will help you evaluate the richness of the pension versus a 401/457 match.