Do I need to take risks to get rich?

Originally published at: Do I need to take risks to get rich? – Personal Finance Club 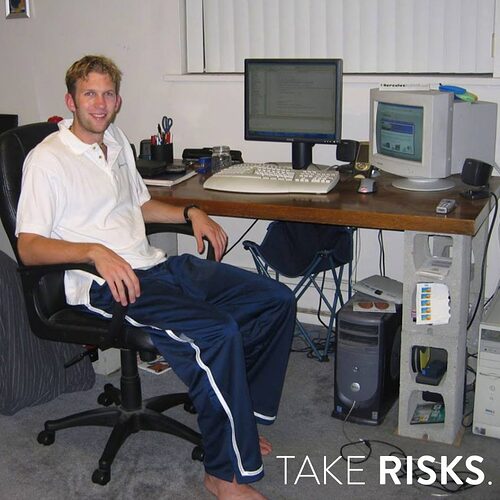 I think a lot of people see me as a very conservative investor. I preach paying off debt, living below your means, and investing early and often often in low fee index funds. And I strongly believe in that. It’s the bedrock on what I’ve been doing for my entire adult life.

But on top of that foundation, I’ve also decided to take a few big risks. One of those risks was turning down a lucrative full time job offer from Microsoft as I was graduating college, and instead starting my own company. I ended up selling that company at the age of 34 for over $5M. This is the first picture I have of that journey. It’s taken in my basement apartment bedroom when I was 22 years old. I was frugal even back then. My desktop was my parent’s old coffee table, that I took off the legs and stacked on cinder blocks. I’m pretty sure I picked up that second monitor for free when someone was throwing it away. My office is set up in my bedroom because I shared the rest of the apartment with my roommate. Pretty modest accommodations compared to how I would have been welcomed at Microsoft.

But despite the frugality, I decided to take a risk. No doubt, I was in a position of privilege to be able to do that. I graduated from college debt free thanks to my parents saving for tuition, a track scholarship, working during the summers (and sometimes the school year), and teaching in grad school. If I failed, I was pretty confident I would be able to get a job, and had a network of friends and family who wouldn’t let me become homeless. But still I had to turn down the sure thing. I had to risk a public failure. It was scary to consider being seen as the kid who tried and failed and went crawling back to corporate America.