Originally published at: Here’s how Bitcoin performed compared to the S&P 500 in 2021 – Personal Finance Club 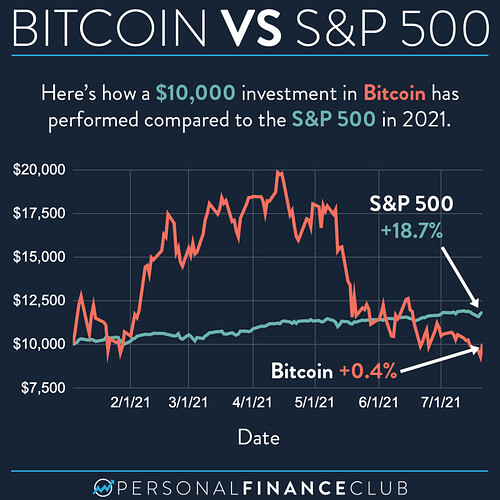 Based on the totally unscientific measure of “buzz I am hearing right now”, interest in bitcoin has died down a lot, and the price seems to reflect that. Meanwhile, pop culture interest in index funds remains at its all time high of “nobody cares”. But like the parable of the tortoise and the hare, the S&P 500 continues to chug along delivering wealth to all those who willing to save, invest, and take the long term view.

Warren Buffett has famously been quoted as saying that a $10,000 investment in an index fund when he bought his first stock in 1942 would now by worth $51 million dollars. When asked why everybody doesn’t do that he answered, “because nobody wants to get rich slowly”.

For what it’s worth, that quote from Warren is a bit outdated as it was back from 2018 after a big bull run of the stock market. That index fund investment wouldn’t be worth $51 million anymore. Now it’s worth over $71 million. That’s the power of compound growth. The numbers get big the longer you invest.

What’s your plan? Are you willing to get rich slowly?