How frugal is LeBron James? 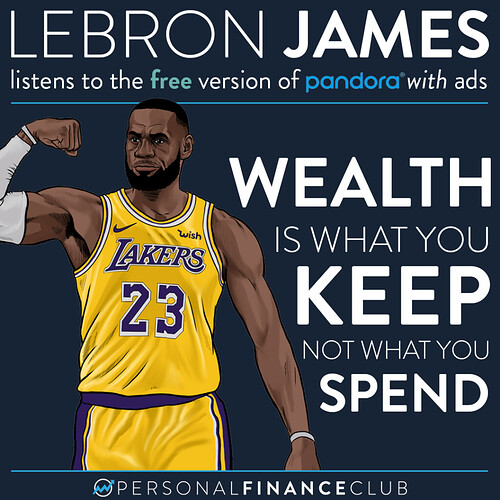 Lebron James has been called the cheapest player in the NBA. He really did say that he doesn’t pay for Pandora without ads (I think it was $3/month at the time) in order to save money. (I think Pandora since reached out and offered him a free upgrade, but I’m not sure if he took it).

Meanwhile, his net worth is estimated at half a BILLION dollars. That’s 500 millions. Like making a million dollars a year for 500 years and never spending a penny. It’s a very big amount of money.

While it’s estimated that 60% of NBA players go broke after leaving the league, Lebron is on the way to creating a dynasty of wealth. To be fair, the $3/month itself would make exactly zero difference at his scale of wealth. Maybe he was doing it to set a good example, or make a point. But that mentality is what leads to a set of decisions that will grow wealth over time, not squander it.

What’s he do with all that money? Well for sure he spends some. He’s got a fancy house and all that. But he also started a foundation and has already pledged to pay for 2,300 children to go to college. Can you imagine the impact those 2,300 college educated young adults will have?! The seeds that Lebron is planting. That’s awesome. Way better than blowing his money on diamonds and cars and $3 Pandora Premium subscriptions.