How to protect yourself against inflation

Originally published at: How to protect yourself against inflation – Personal Finance Club 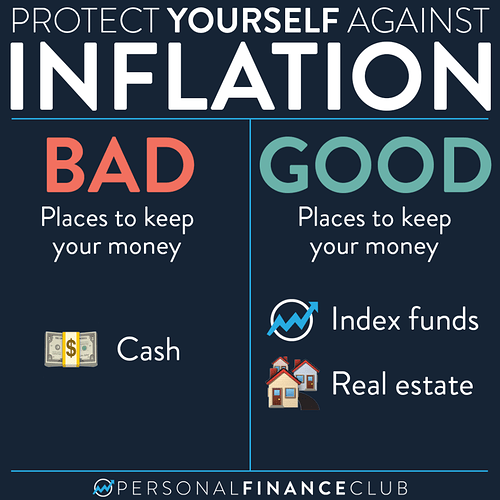 Inflation is a reality of participating in the modern economy. Prices go up over time. Here in the US, we’ve enjoyed relatively low inflation over the last several decades compared to much of the world but it still happens. Remember when YOU were a kid and a gallon of gas only cost some amount less than it does now?! That’s not just nostalgia, it’s real. Prices go up over time.‎
‎
Inflation has been trending up the last few months. Likely a result of all the weird economic stuff happening around the pandemic (both market and government responses) prices have been going up faster than usual. Although, for three months last year we actually experienced negative inflation where prices got cheaper. So it’s not totally surprising to see a response in the other direction.‎
‎
So what do you do about it? Well, inflation mostly negatively impacts CASH, since that’s how it’s measured. For example, in 1981 (40 years ago) If you had $10,000 in cash, you could buy a nice new car. If you kept that cash under your mattress and pulled it out today, you could only buy about 1/3 of a nice new car. That cash has declined in real value by about 2/3rds.‎
‎
BUT, if in 1981 you used that cash to buy $10,000 worth of an S&P 500 index fund, today you would have over $600,000 or enough to buy TWENTY nice new cars, a 20X INCREASE in real value.‎
‎
So what am I personally changing faced with the prospect of upcoming inflation? Nothing! I already knew that cash was a drag on my investment portfolio, so I keep only what I plan to spend in the next year or two in cash (my checking account, emergency fund and sinking funds). Everything else is in an inflation-hedging asset like index funds or real estate!‎
‎
As always, reminding you to build wealth by following the two PFC rules: 1.) Live below your means and 2.) Invest early and often.‎
‎
-Jeremy‎
‎
via Instagram
‎