How to retire off of your side hustle income

Originally published at: How to retire off of your side hustle income – Personal Finance Club 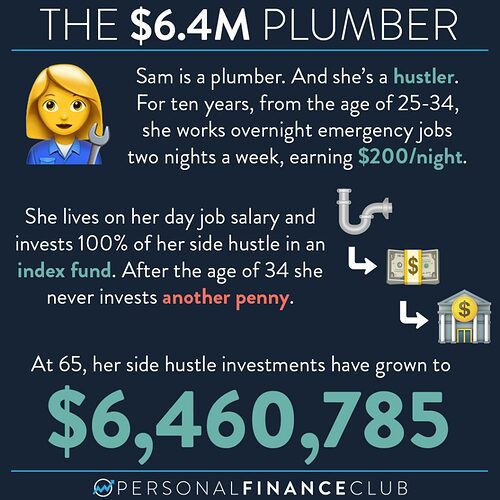 Sam’s a hustler and she’s not normal. Normal is ramping up your lifestyle to match your income. Sam went the other direction. She went HAM on her side hustle and investing. Two nights a week for 10 years she works her butt off. She helped people with plumbing problems after hours and made some pretty serious cash doing it.⁣‎‎
⁣‎‎
Then, instead of realizing she can afford a bigger house, a better car, another trip, she invested every penny of it. And she still had her ENTIRE DAY JOB SALARY to live off of. And she can live well. Nice house, fine car, great trips. ⁣‎‎
⁣‎‎
Then, at the age of 34, she never works nights again and never invests another penny. It’s cruise control from that point forward. But her money is working hard for her, earning 10% per year in a target date index fund. Her total side hustle earnings were about $17K/year or $172K over 10 years. But that money grew and grew and was worth $6.4M when Sam turned 65. Or maybe she decides to retire 15 years early at the age of 50 with $1.5M in the bank. Buying 15 years of your life back ain’t so bad. ⁣‎‎
⁣‎‎
Sam followed the two rules of Personal Finance Club, and so should you. 1.) Live below your means and 2.) Invest early and often.⁣‎‎
⁣‎‎
-Jeremy⁣‎‎
⁣‎‎
via Instagram