Originally published at: I’m 35 with no investments… is it too late? – Personal Finance Club 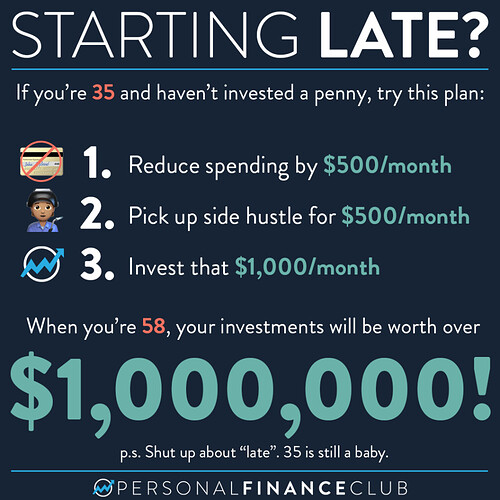 I often use a 40 year time horizon in my examples. I do this because a typical working career is around 40 years, and it’s such a long time it’s able to demonstrate the jaw dropping power of compound growth.

But I get very reasonable feedback from those who AREN’T 25. And that’s totally fair! So here’s an example starting at 35 with ZERO saved, and STILL retiring SEVEN YEARS earlier than traditional retirement age of 65.

At the end of the day it’s just math. Are you starting later or wanting to retire earlier? You gotta put more money away than those who are gonna be investing for an additional decade.

But hope is not lost! I think a lot of us can find $500/month somewhere in our budget. Can you get a cheaper car, house hack, or downgrade some of those subscriptions? And a $500/month increase in income may be walking dogs a couple times/week, bartending a few times a month, or a raise at work you invest instead of spend. If you want to make it happen, think of ways to do it instead of excuses why it’s not possible. You got this!

The math on the investing is $1,000/month at a 10% rate of return for 23 years turns into a million bucks. The S&P 500 has returned over 11% per year over the last 40 years! This doesn’t account for inflation, but with inflation (and as people age) income generally goes up, allowing for further increases in investing. And in my experience, once new investors start to see their money grow, they get much more hyper focused and hit their goals way ahead of the original timeline!

That’s how you do it. Spend less than you make, invest the difference. Want to get there faster, do those things more.