Is a Costco executive membership worth it?

Originally published at: Is a Costco executive membership worth it? – Personal Finance Club 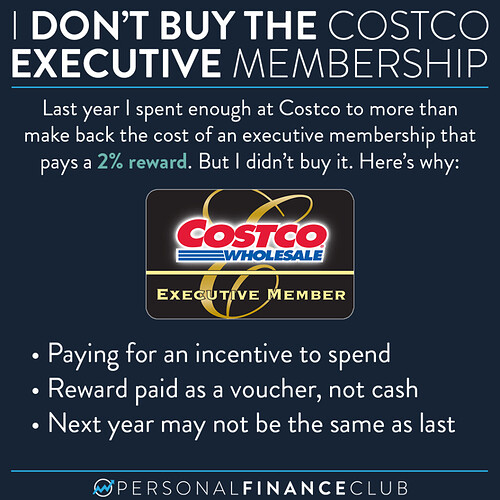 I was shopping at Costco the other day and when I checked out the cashier said I needed to renew my membership for $60 so I said “sure”. Then a moment later some other employee runs up to me and told me that I was “flagged”.

I thought “UH OH! What did I do?!” Well it turns out I was flagged as a Costco member who spent SO MUCH last year that I would have mathematically benefitted from the more expensive $120 “executive” membership that includes a 2% reward. It was kind of a high pressure situation because I was currently checking out with people behind me and they kind of needed an answer. I turned them down for a few reasons:

1. I really hate paying money just to get an incentive to spend more money. Once I spend that extra $60, in the back of my mind I’ll want to make sure it’s “worth it” by spending even MORE money. I’m financially better off just keeping my $60 and trying to spend less!
2. The reward is sent to you as a voucher that can be spent at Costco. Vouchers get lost, forgotten, etc. They’re inherently worth less than cash due to their narrow use. If I was an executive at Costco, I would absolutely be keeping track of what percent of those vouchers are ever actually spent. I’m 100% sure that number would be way under 100%. I have to accept the reality that there’s a risk of me never using some or all of the voucher.
3. Sure, LAST year I spent enough to make it “worth it”. But last year was a pandemic and I was shopping at Costco a lot just to make fewer/bigger trips than usual. Even if last year was a normal year for me, things change in my life, including my shopping habits. There’s a very good chance next year will not be the same as last.

So, I turned it down. In general, I always prefer money in my pocket instead of someone else’s! Beware of the psychological tricks like above that companies may be playing in order to get you to spend more money and maximize their profits!