Is now a good time to buy a used car?

Originally published at: Is now a good time to buy a used car? – Personal Finance Club 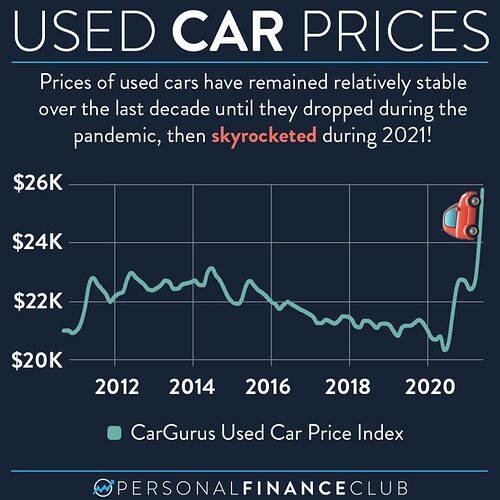 I have a friend who bought a used car a couple years ago. It’s a 2016 Kia Soul. She got a good deal on it and bought it for about $12,000. Recently she told me she could sell her car more more than she bought it for, even though it’s two years later. I said “No way! The value of a car drops about 10% per year almost like clockwork”. So I looked it up and sure enough the prices I was seeing for her exact same car were in the $16,000 range! In my entire life I’ve never seen a used car price go UP! (with the exception of rare or collectable classic cars of course)

So what’s going on here? Well, it’s an interesting ripple effect of the pandemic. In early 2020 when travel dropped to near zero, rental car companies largely sold off their fleets, dropping the price of cars as inventory flooded the market. Supply and demand drive prices in a marketplace. As supply increases, price decreases as buyers have more options.

Now in 2021 as the impacts of the pandemic on travel are disappearing and pent up demand for travel is returning, the opposite is happening. Car rental companies are trying to buy up cars and car companies are trying to ramp up production. But since they cancelled their microchip orders, they’re finding their supply chains are backed way up. Increased demand and decreased supply has caused used car prices to skyrocket!

How interesting! Thanks to @cargurus and @planetmoney for data and information for this post. In a recent episode, Planet Money (one of my favorite podcasts) interviewed a guy who runs use car auctions and his advice was to avoid buying a car right now! The market is likely to correct itself over time so try not to pay the premiums during this supply crunch!

That’s actually super interesting that the price for a given used car seems to have gone up recently – and not insignificantly!

Is there a website or other resource that tracks new and used car prices over time?

I’m curious if there are line graphs somewhere that show, say, for a car of a given make, model, and “trim”:

Yeah, used car prices are still sky high due to increased demand, decreased supply, and supply chain issues limiting the number of new cars being made!

I’m not sure this is exactly what you wanted, but it’s where the data for this post came from: