Should I invest while I'm in debt?

Originally published at: Should I invest while I’m in debt? – Personal Finance Club 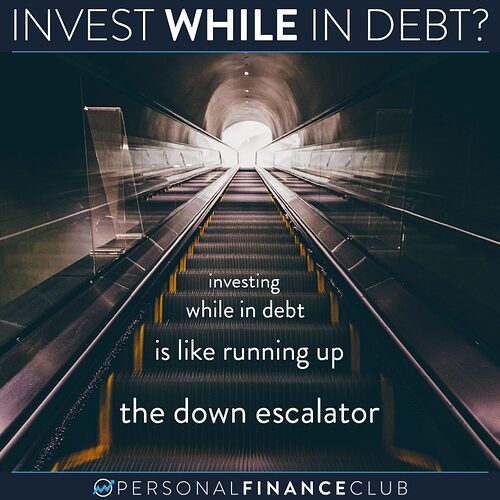 I get this question a lot: “I’m in debt, but I don’t want to delay investing.” I love that because you wanna start building wealth. But here’s the thing, right now you’re getting crushed by negative interest. Before you start taking advantage of the positive compound growth you have to stop the bleeding.⁣‎
⁣‎
So here’s how you go from being in debt to being rich: Go HAM on the debt. Just go absolutely ham on it. Dial your living expenses down to nothing. Pick up extra shifts. Bartend at night. Sell everything. Don’t just “make the payment”. Every month throw MASSIVE chunks at that debt. Figure out how FAST you can get there. Measure it in months and count them down. GO. HAM.⁣‎
⁣‎
THEN, when you’re 100% debt free (except a mortgage), ease up a bit. Take HALF of those debt payments you were making and SPEND THEM. Go out to dinner. Buy the outfit you hadn’t for two years. Go on vacation.⁣‎
⁣‎
BUT WITH THE OTHER HALF, invest it each and every month forever. For ALMOST any numbers of debt and income, this “go ham” strategy will result in millionaire status later in life. The “keep doing the same thing” strategy will result in being broke forever.⁣‎
⁣‎
As always, reminding you to build wealth by following the two PFC rules: 1.) Live below your means and 2.) Invest early and often.⁣‎
⁣‎
– Jeremy⁣‎
‎
p.s. People always ask me what “go ham” means. It means when you just absolutely go ham on something. Like just go ham on it.‎
⁣‎
via Instagram