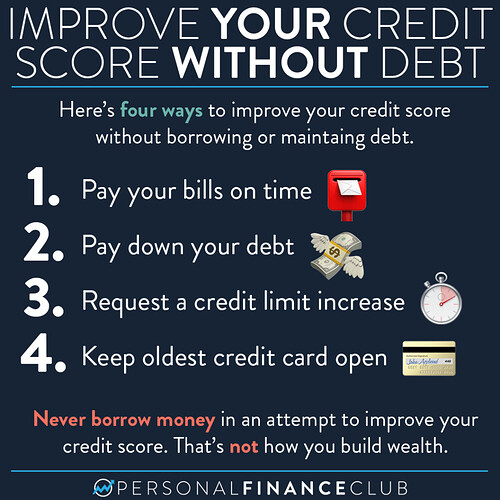 I don’t talk about credit score much, because compared to building wealth it doesn’t matter much. It is MUCH better to have a lot of money than to have a good credit score. A credit score is just a game banks set up to maximize their own profits. Don’t get fall for the trap of paying them even MORE money so you can earn the right to borrow more money and pay them more money. Instead, pay off your debt and invest so you can build wealth and you never need your credit score again!‎
‎
My credit score does not matter to me or anyone else. I never borrow money. No one asks. No one cares. I pay for stuff with the money I have. It’s great. But if you want to know it, I just looked it up. It’s 791. That’s in the “excellent” range according to TransUnion and Equifax. Even if I WERE to borrow money, improving my credit score beyond 791 would likely have no impact.‎
‎
Here’s how I have this excellent credit score. I have a credit card. I use it to buy stuff. I pay it off in full every month. I’ve had the same card for a very long time. That’s it. Last time I had a non-credit card loan was about 12 years ago… a $5,000 loan from a credit union for a car. CreditKarma lists six factors that impact my credit score. All six are perfect except one: Total accounts. So the bank’s game says I should open up more accounts so I can pay them to borrow more money to get a better score so I can borrow more money and pay them more money. ‎
‎
So if you’re someone who is worried about the credit score game, just keep it simple. Pay all your bills on time, pay off all your debts, don’t close your oldest credit card. Your score will be fine. Put your energy and focus on building wealth, not the silly game set up by the banks. :)‎
‎
As always, reminding you to build wealth by following the two PFC rules: 1.) Live below your means and 2.) Invest early and often.‎
‎
-Jeremy‎
‎
via Instagram