This is what happens when you only invest HALF your raise

Originally published at: This is what happens when you only invest HALF your raise – Personal Finance Club 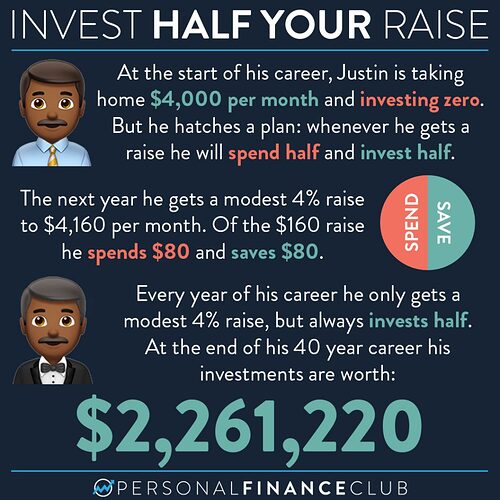 Justin started out pretty normal. He got a job and spent every penny to his name. But after a year of making about the US median household income he realized he was still broke. So he hatched his plan: Invest half of all future raises.
⁣‎
Hey, if he can make it on $4,000/month, $4,080 should be cake. Plus now he’s getting in on that sweet, sweet investing. Money making money is way easier than working for your money, trust me (It’s taxed lower too! Thanks government!).⁣‎
⁣‎
Each year as he collected his modest raises, he kept modestly cranking up his investing. And sure enough, at the end of his career Justin is a multi-millionaire, living pretty comfortably the whole way along too. ⁣‎
⁣‎
For the math on this, I assumed a 7% per year growth of his investments. For context an S&P 500 index fund has returned about 11.7% per year over the last 40 years. 7% is a conservative projection accounting for inflation. So Justin’s $2.2M is spendable as though it’s today’s dollars.⁣‎
⁣‎
When you get a raise, do you have a plan to increase your investments?!
⁣‎
As always, reminding you to build wealth by following the two PFC rules: 1.) Live below your means and 2.) Invest early and often.⁣‎
⁣‎
– Jeremy⁣‎
⁣‎
via Instagram