Originally published at: What inflation will look like in the future and how to hedge against it – Personal Finance Club 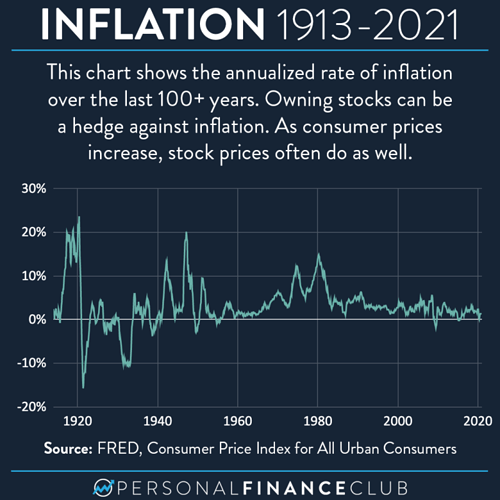 I’ve been hearing a lot of talk about inflation lately. It’s the topic of the day. And that topic seems to change as often as the soup does.‎
‎
I don’t personally know if we’re going to see a lot of inflation in the future. Other than death and taxes, I can’t tell you much of anything to be certain of in the future. But I have seen a lot of people (who don’t seem to have a deep understanding of macroeconomics) running around like chickens with their heads cut off squawking about inflation. When I listen to experts who have spent their lives studying this, the answer usually sounds like “it’s complicated” and “we’re not sure”.‎
‎
The things in the past that used to drive inflation (low interest rates and government money creation) don’t seem to do that anymore. The experts aren’t exactly sure why. Some theorize that massive companies like Amazon may have more of an impact on consumer pricing than those governmental levers. Others think it’s linked to weaker consumer demand. Others think there are factors at play that we don’t yet understand.‎
‎
But here’s what I do know. Whether or not inflation increases in the future, I plan to do the same thing. Buy and hold index funds. Owning index funds is a hedge against inflation. If consumer prices go way up, that bubbles up to corporate profits which are reflected in increased share prices. If inflation stays low, well, companies still profit which is reflected in increased share prices. ‎
‎
Where you don’t want to be is broke or in a heavy cash position. Cash in the bank is constantly losing purchasing power to inflation.‎
‎
I keep just the money I plan to spend in the next few years in cash, and everything else I keep invested! That way I can sleep like a baby at night and I don’t even need to squawk about inflation.‎
‎
As always, reminding you to build wealth by following the two PFC rules: 1.) Live below your means and 2.) Invest early and often.‎
‎
-Jeremy‎
‎
via Instagram