What is FI/RE? How do I retire early? 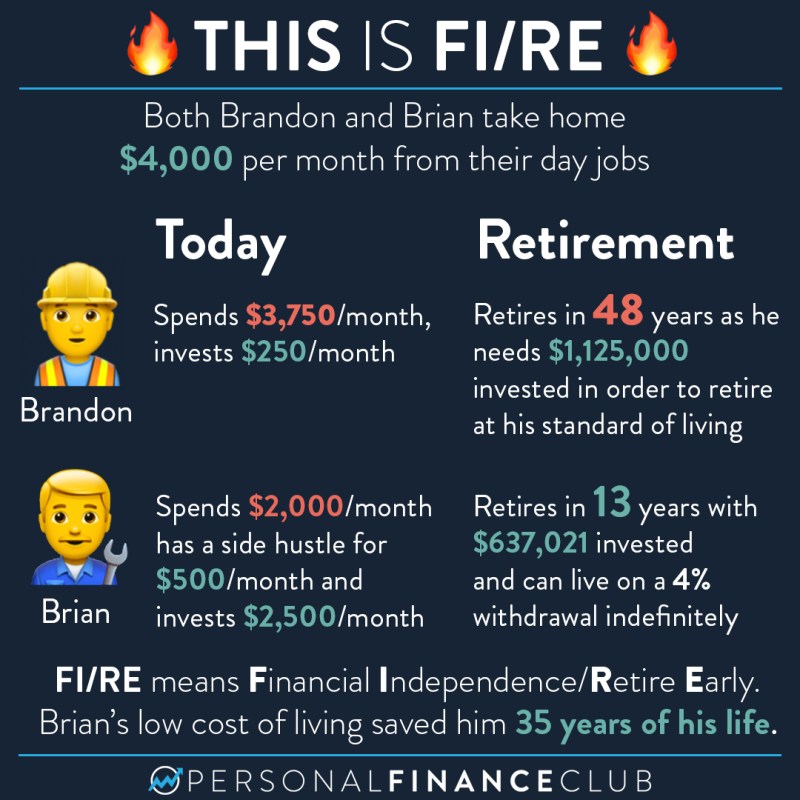 Let me be clear: Brian is not normal. He doesn’t use his money like anyone else around him. He rarely buys clothes, but when he does they’re from TJ Maxx or a thrift store. He wouldn’t dream of paying retail prices. He bikes to work to save gas money. He has roommates. He rarely eats out, and when he does he orders water and the cheapest thing on the menu. His phone is six years old and doesn’t run modern apps. His cell bill is $20/month and he jumps between wifi spots to avoid using data. When he needs something, it’s Craigslist not Amazon. When he’s done needing something, it’s Craigslist not the trash. When his friends are blowing hundreds of dollars at the bars on the weekend, he’s behind the bar earning hundreds.⁣⁣⁣⁣‎‎
⁣⁣⁣⁣‎‎
Brian also saved himself 35 years of toiling away at a day job living like this. After working only 13 years, with a modest 7% real return on his investment, he can quit all of his jobs and retire indefinitely on a 4% “safe withdrawal rate” of his nest egg.⁣⁣⁣⁣‎‎
⁣⁣⁣⁣‎‎
Brian is living his best life. He’s more interesting than his peers who blow their paychecks at the bar every week. He’s also happier. It’s not fun to be worried about running out of your paycheck before the next one comes. It’s not fun to be worried about if you’ll ever be able to retire. It’s fun to be young and be able to do whatever you want for the rest of your life. Spend time with your kids, start a business, work on a hobby, volunteer, keep working or whatever you want!⁣⁣⁣⁣‎‎
⁣⁣⁣⁣‎‎
It took Brian 13 years. There’s no secret. It’s living below your means and investing early and often.⁣⁣‎‎
⁣‎‎
As always, reminding you to build wealth by following the two PFC rules: 1.) Live below your means and 2.) Invest early and often.‎‎
‎‎
– Jeremy‎‎
‎
via Instagram