What is financial independence?

Originally published at: What is financial independence? – Personal Finance Club 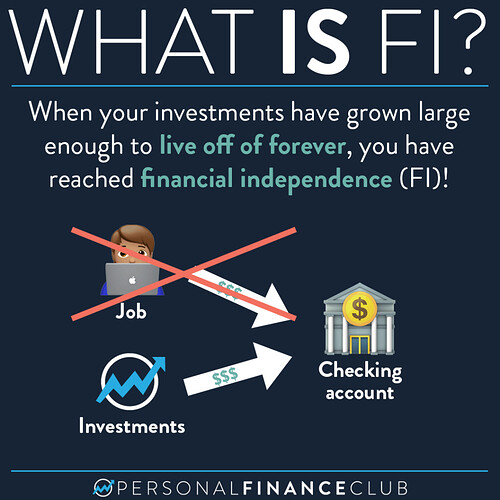 If you’re newer to the investing world, you may have heard of the term “FI” or “FI/RE”. They stand for Financial Independence / Retire Early. It’s the idea that retirement is not an age, rather an amount of money. Once you understand that, you realize there’s no reason you should be working a job you hate until you’re 65 when you’ll magically get to retire. That’s wrong for two reasons:

1. If you don’t invest, you DON’T get to retire at 65 (ever see one of those 80 year old walmart greeters?!)
2. If you invest more aggressively you can retire WAY YOUNGER!

HOW MUCH money do you need to get there?! A solid rule of thumb is 25 times your annual spending. For example, if you spend $40,000 to live, once you have a million dollars invested (25 X $40K) you are financially independent!

HOW do you live off your investments? Once you reach FI, you can simply take out your annual expenses from your investment account each year and leave the rest to grow. For example, if you have a million dollars invested in index funds across all of your investment accounts, you could sell $40K worth over the course of the year, transfer that cash to your checking account, then spend it on your living expenses. You leave the other $960K to grow, and by the following year, it’s likely to be even more than you started with!

That’s what I’ve been doing for the last four years or so. When I quit my last real job in 2017 my net worth was about $2.9 million. Since then I’ve been spending that money to live and my net worth has grown to about $4.2 million! I expect that trend to continue because I’m living on less than 2% of my investments each year!