Which president had the best stock market performance? 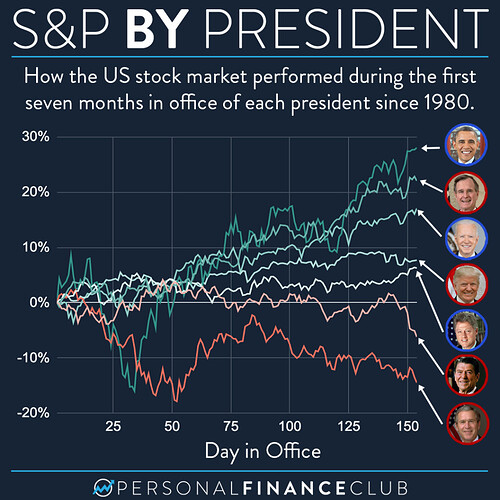 In today’s polarized political climate, it’s tempting to jump to simple conclusions about who is good and who is bad and what one party or the other will mean for this or that. But the stock market is a complex machine. And it doesn’t really care who is in office.

The US stock market represents many thousands of publicly traded companies, all of whom are researching, innovating, growing, selling, and profiting. The value of the millions of workers who go to work every day to create productivity is being pumped into the value of the stock market. Decades upon decades of brand loyalty, intellectual property, recurring subscriptions, etc is represented in that value. Who currently sits in the oval office doesn’t figure into it all that much. The market is gonna grow as the companies it represents does.

But during the first seven months of our last president’s term, Trump tweeted about the stock market dozens of time, claiming credit for the market breaking all time highs. He also claimed “Your 401k’s will crash with Biden”. As it turns out, we’re seeing even more record highs during Biden’s term. The S&P 500 just closed at an all time record high, 19% higher than we ever saw while Trump was president.

This isn’t necessarily to Biden’s credit just as we can’t credit Trump for the stock market highs we saw during his term. Either way, the market always has and will continue to break record highs as it measures the economic output of a productive economy.

Want to get in on that action? Buying and holding an index fund which represents ownership in the entire stock market, is the simple and effective way to harness the wealth generating engine of the US and global economy. It doesn’t matter who is president or what market prognosticator is predicting what. Buy early and often and don’t sell anything until you retire. That’s how you get rich.