Why won’t billionaire Peter Thiel pay a penny on his billions of dollars of Paypal profit?

Originally published at: Why won’t billionaire Peter Thiel pay a penny on his billions of dollars of Paypal profit? – Personal Finance Club 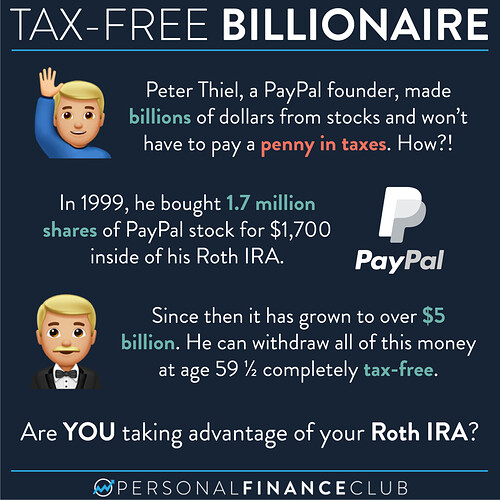 The Roth IRA was made for the middle class… But Peter Thiel used it to save himself over a billion dollars in taxes.

In 1999, he bought 1.7 million shares of PayPal for $0.001 a share, totaling $1,700. He had access to private shares as a founder so this type of opportunity is not available to most people.

When his PayPal stock grew to millions of dollars, he sold shares and invested in other startups. In a regular taxable brokerage account, he would have had to pay capital gains tax and dividend tax… but not in a Roth IRA! Once he turns 59½ he can withdraw every penny from his $5 billion+ Roth IRA TAX-FREE.

What does this mean for you? Are we saying you should load up your Roth IRA with penny stocks so that when it goes to the moon and you become a billionaire you’ll get to keep it all? No! That is extremely risky. We’ll never know if Peter Thiel was lucky or good at picking stocks… and just like with the lottery, few win but most lose.

But there’s no doubt that a Roth IRA is a great tool to save on your tax bill!

So what do you do? Buy and hold index funds. Start early and work on maxing out your Roth IRA. You’ll pay tax upfront (out of your paycheck) but you’ll never get taxed again. The ultra wealthy have taken advantage of their Roth IRA, and so should you.